Before eight in the morning.

After two years of owning this house I have acquired a lot of rubbish:

Building rubble; old tiles and sanitary ware from refurbished bathrooms; damaged cupboards which have been removed from bedrooms and the kitchen; and even remnants of the thing in the corner.

To my surprise, the task-force consists mainly of women.

They change out of brightly coloured, immaculate saris into their work clothes,

Then, with small shovels, scoop the rubble into baskets and carry it on their heads to the waiting open-topped vans. 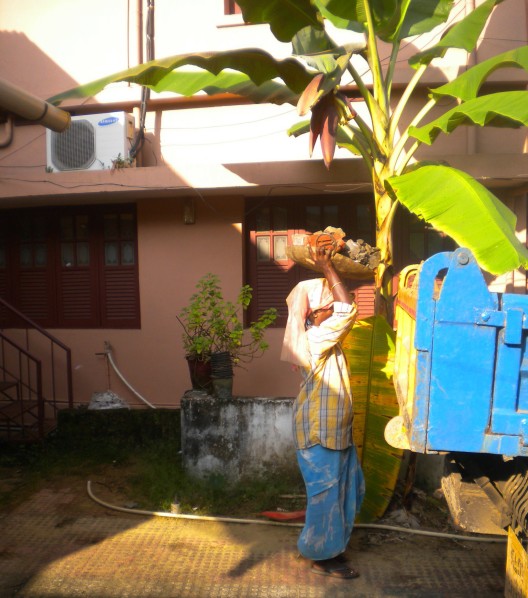 These are Tamil women from the neighbouring Indian state of Tamil Nadu: a large “go-ahead” state, but with many extremely poor and illiterate workers.

A small team of Kerala men – drivers and supervisors – sit chatting and reading newspapers while the Tamil women set to their heavy manual work.

I had planned to feed on all the details of my compound’s clearance for this blog.

But the sight of so many women earning their children’s food by the literal sweat of their brow somehow shames me.

This entry was posted on December 4, 2010 by neitherusenorornament. It was filed under shame, women, work and was tagged with Women's work.