One of the delights of our recent trip to Nelliampathi was visiting the local tea plantations. They are a sensual delight.

Perhaps the colour is due to the tea bushes themselves, for constant plucking keeps their growing tips always young and fresh.

Maybe it is the altitude required for tea cultivation.

Possibly, the effect is a combination of both factors.

But the sheer intensity of the green shrubs against clear blue skies is almost breath-taking. 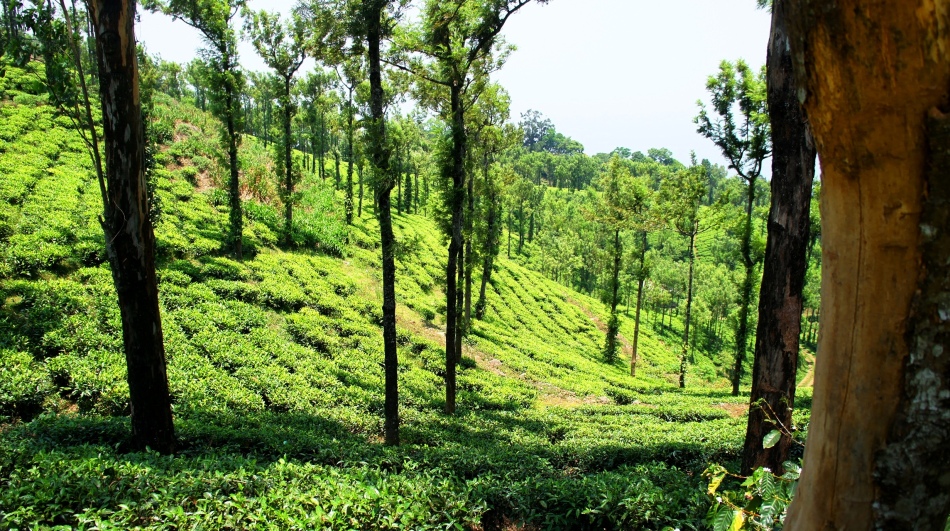 Left wild, tea bushes will grow to a height of well over 10 metres (more than 30 ft.), but for leaf-harvesting they are pruned to less than 1.5 metres (5 ft.)

There is only one species of tea-plant:

It was initially native only to China.

All teas are made from its varieties and cultivars.

When the drink arrived in Europe, it became a sensation.

In time, the East India Company set up tea plantations to feed this habit and several different accounts of the Indian tea industry’s origins have emerged.

While the British were desperate to drink this stimulating new infusion, the Chinese had no interest in trading tea for the proffered opium or English wool and would only accept silver for its purchase.

Perfidious Albion had only meagre reserves of silver. Their solution was to steal the plants.

Once smuggled out of China, tea was soon grown in the hill country of India by the British colonists.

Combined with sugar, grown with slave-labour from the West Indies, tea became the defining drink of Britain and its Empire.

For more information on the early politics of Indian tea cultivation, I commend Amitav Ghosh‘s beautifully written “The Sea Of Poppies“. It is the first novel in a projected trilogy, set just before the First Opium War.

The book gives fascinating insights into the interplay of slave trade, the devastation wreaked on Indian agriculture by the East India Company’s fostering a switch from food to opium production and British demands that China buy this opium.

This entry was posted on April 11, 2011 by neitherusenorornament. It was filed under Kerala, tea and was tagged with Lu Yu, Nelliampathi, Tea.