Table For Two At Karim’s 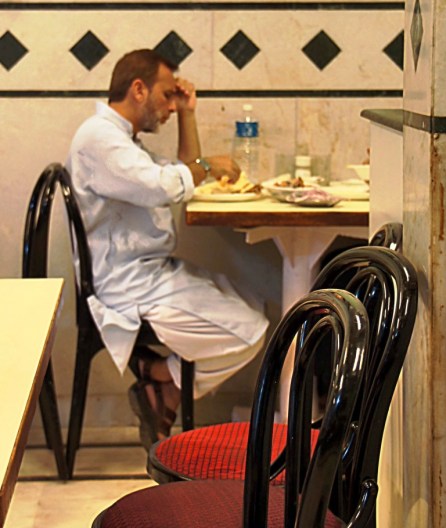 We had arranged with our rickshaw-cyclist that the tour of Chandni Chowk would include stopping off for lunch at Karim’s – a famous Delhi restaurant.

At first sight, Karim’s is not so much a restaurant as a puzzling low-level building-complex.
Entering into a blind alley, you are met by a confused group of eating-rooms and open-fronted kitchens.
They all form part of Karim’s Restaurant.

Karim’s is so popular that at peak hours there are usually long and hungry queues waiting to be seated.
Pre-warned, we opted to eat early.

I chose a simple chicken curry, served with freshly baked naan bread: it was utterly delicious. I have been eating curries since early childhood but this was the best I have ever tasted!
Robin, my good friend and travel buddy, expressed due remorse : he had chosen something a little fancier – but not half as wonderful as my chicken curry.
I showed commendable virtue and let him dunk his naan bread in my gravy.
Never let it be said that I lack magnanimity!

True to form, by the time we left the restaurant, people were queuing outside to take our place.

We had urged our young cyclist-guide to join us as a guest for lunch. But he politely declined.
I am not sure if he was a Hindu who couldn’t face a non-vegetarian meal, or if he worried lest we deduct the cost of his meal from a possible cash tip, which might be far more important to his family’s survival..
________________