India vs Pakistan: The return of the epic

George Orwell said sport is “war minus the shooting”. In a wickedly revisionist twist to this epithet, many describe India-Pakistan cricket as “war minus the nuclear missiles”. 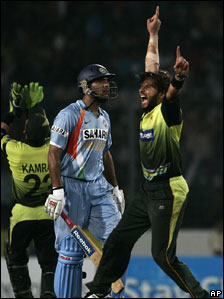 Many would say the same of Wednesday’s World Cup cricket semi-final match between India and Pakistan in India’s Mohali, not far from the Pakistan border. Listen to the metaphors ex-cricketers are serving up to describe the epic encounter. Vivian Richards says this is “the best war that can be fought … a war without weapons”. Imran Khaninsists – quite correctly – that there will be a “curfew in the subcontinent on the day of the match”. He also flags up a concern: “I hope it is played in the right spirit.”

Khan’s concern is understandable. The two sides haven’t played a single match on each other’s soil since the 2008 Mumbai attacks. With ties between the two neighbours plummeting, Pakistani cricketers have been kept out of the lucrative Indian Premier League after the first season. Since the attacks, the two sides have played each other only twice: Pakistan won a 2009 Champions Trophy game in South Africa by 54 runs, while India won a closely fought 2010 Asia Cup game in Sri Lanka by three wickets with one ball remaining. So the pressure on both sides playing in Indian Punjab will be enormous.

And not many expected an India-Pakistan semi-final this World Cup. The subcontinental twins had been disgraced – ousted unceremoniously by minnows – in the last edition of the Cup in West Indies in 2007. And in the run up to this edition, Pakistan cricket had reached its nadir with three top players found guilty of corruption and the usual selection controversies. A team which appeared to be in a shambles has already confounded pundits and proved that they excel when in trouble.

So Pakistan have won five of the six league games and decimated the West Indies in the quarter-finals.They boast of two of the four top wicket takers in the tournament: captain Shahid Afridi and Umar Gul have picked up 35 wickets between them so far. And thus, this epic battle has been literally foisted upon Indian soil by Pakistan, a rousing victory of sports over politics.

No one believes that Wednesday’s game will help ease relations between the squabbling neighbours despite Indian PM Manmohan Singh’s cricket diplomacy. Nobody believes that it will pave the way for resumption of bilateral cricket ties, which have been disrupted in the past by wars, the demolition of a mosque, an attack on the Indian parliament and religious riots. The irony is that India and Pakistan had become quite comfortable with winning and losing as they played more frequently before the Mumbai attacks: the two sides played a Test series every year between 2003 and 2007. The honours had been even: India and Pakistan had won one series each and drawn the remaining two. “These days,” wrote Indian scholar Ramachandra Guha, “Indians don’t take failure as national humiliation. Perhaps they consoled themselves that the country surpassed Pakistan in all spheres. It had better scientists, better writers, a more vigorous film industry, and was a democracy besides.”

Will Wednesday mark a return to the old days of crude nationalism and jingoism? I hope not. I hope fans from India and the few thousand from across the border will be generous in their cheer for both the teams. Who can forget the time when Pakistan lost to India during the 1996 World Cup? Fans in Pakistan smashed TV sets, a college student fired a hail of bullets from a Kalashnikov into his TV set and then on himself, another fan died of a heart attack, captain Wasim Akram received death threats, a fan filed a petition in the court against the “disappointing performance” and a cleric said Pakistan would never win at cricket so long as a woman – Benazir Bhutto was the prime minister – ruled the country. Even the plane carrying the players had to be diverted to Karachi as irate fans waited in Lahore carrying expletive-laced banners and rotten eggs. Surely such passions have abated with the passage of time.

So who will win this “final before the final”? Though Pakistan has an overwhelming 60% win rate against India in one-day games, history is heavily stacked against them in the World Cup: it has lost all the four previous encounters with India. Imran Khan says India begin as favourites. But mercurial Pakistan could easily provide the most tantalising twist in the tail.